The Washington Ornithological Society was chartered in 1988 to increase knowledge of the birds of Washington State and to enhance communication among all persons interested in those birds.

Each year WOS publishes information about most of the Audubon CBCs scheduled to go on around the state, so that birders can consider joining counts whenever and wherever they prefer. The 2021 CBC information has just been posted on this website. The big days look to be December 18th and, for procrastinators, January 2nd, but there are counts on many other dates as well. Jim Danzenbaker, a former WOS president, has gathered this information for the last five years. Thanks, Jim! Check out the counts here.
WBRC accepts 22 reports and adds one new species to the state checklist

The Washington Bird Records Committee (WBRC) held its fall meeting via Zoom on October 23rd, during which it added Common Crane to the official state checklist. The checklist now stands at 522 species. Among the accepted reports at the meeting were Costa’s Hummingbird, Purple Gallinule, Little Stint, White-rumped Sandpiper, Black-headed Gull and Snowy Egret. A sighting of a Philadelphia Vireo in September in Washtucna was supported by photo documentation, the first time for this species. Ten reports were not accepted by the committee. Read the WBRC Fall 2021 Meeting Results here. 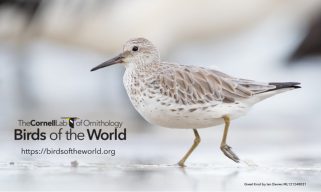 Thanks to a partnership with Cornell Lab of Ornithology, we now have a terrific new benefit for WOS members: FREE online access to “Birds of the World,” the world’s largest online encyclopedia of birds. Inside its 10,700+ scholarly, in-depth species accounts you’ll find expertly curated media galleries with photos, videos, and sound recordings, dynamic range maps, breeding calendars, and other life history details. Soak up detailed accounts of every species and every family and use the Taxonomy Explorer to explore the birds in your own county. Learn more about this benefit and how to get access to it on our Birds of the World page.
WOS News Issue 193 for October-November has been published! 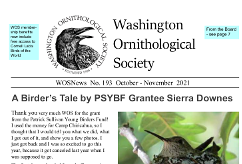 Sierra Downes, youngest-ever Patrick Sullivan Young Birder Fund grantee, takes us along on her 10-day trip to Camp Chiricahua in southeast Arizona. Her PSYBF grant helped pay for the experience, which she says she’ll forever remember. Ed Pullen discusses an exciting new benefit for WOS members: free access to Cornell Lab’s Birds of the World. Tom Bancroft tells us why he is enraptured by the Northern Fulmar, though he’s less thrilled by one feature the bird is known for. The Ferruginous Hawk is now considered endangered in Washington State. Ryan Merrill reports on the highlights of sightings for June-July of 2019. Current Newsletter.
Nominated WOS officer and board candidates are elected

WOS President Jennifer Kauffman, Vice President David Armstrong, and Secretary Jon Houghton have been relected to new one-year terms. New candidate Bob Schmidt was elected treasurer, replacing Grace Oliver, who served two years in the position. Returning board members Ed Pullen and Matt Yawney were elected to new terms. Dave Kreft, a new candidate from the northeast corner of the state, was elected to an open board position. You can see their candidate statements along with the vote totals here. There were no write-in votes. The new terms begin October 1.
Trouble in Ephrata: a Reminder

WOS Board Member Kim Thorburn wishes to alert the birding community about some troubling reports from Ephrata involving birders or, at least, bird photographers.

“Spokane Audubon has received several email messages from a rancher near Ephrata about people trespassing and parking on the country road so that trucks and equipment are unable to get through,” Kim writes. “The draw is photographing burrowing owls. Apparently, it started after the location was posted on Facebook. The rancher has added ‘No trespassing’ and ‘No parking’ signs but, apparently, the problem continues. It’s the time of year that ranchers are moving livestock and hay so you can imagine how lots of parked cars are causing problems. The sheriff has been notified and responded at least one time.”

Kim says that Spokane Audubon is trying to assist the rancher by reaching out to the birding and bird photographer community to ask everyone to “honor our birding ethics and respect private property and community needs.”

WOS and OBA leadership have decided with regret to cancel the in-person joint meeting in Astoria because of concerns about the prevalance of the Delta variant of COVID.

“We feel that holding such a large gathering of people from two states presents an unjustifiable risk,” said OBA Board President Sarah Swanson and WOS President Jennifer Kauffman in a joint letter.

WOS and OBA will provide refunds to those who registered to attend, though registrants are responsible for cancelling their own lodging reservations.

Conference planners are working to provide a virtual keynote talk with Dr. John Fitzpatrick of the Cornell Lab of Ornithology.

The pelagic trips are independent of the conference and will be run or cancelled at the discretion of Oregon Pelagic Tours.

See the full letter on the conference web page.

Volume 13 of Washington Birds has been published 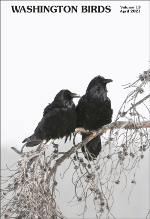 Volume 13, edited by Ed Swan, features articles by more than two dozen contributors. Included are four general interest articles covering diversity and inclusion in birding, habitat change, and birding highlights from all 39 Washington counties. Also in this issue are seven articles with updates, analysis, and expanded knowledge on regularly occurring species covering topics such as the end of the Northwestern Crow as a distinct species and the “Western Flycatcher” problem in Washington. And 11 articles provide species accounts for 14 species new to the Washington State list since 2005, when the latest Birds of Washington State by Wahl et al. came out. Finally, you’ll find the 11th report of the Washington Bird Records Committee (previously published in Western Birds). Read Volume 13 now.
WOS Expands Its Online Presence
WOS Board Member Jason Fidorra has created a Facebook Groups page to allow for more interaction and participation among WOS members in hopes of engaging a broader public with birds and birding topics in Washington. Thanks to Elaine Chuang, WOS also is now posting many of its monthly meeting presentations on WOS’s YouTube channel, so that people can view them at any time. For more information about WOS’s online offerings beyond this website, go to the WOS Online page.
WOS Adds 2020 Tweeters Messages to Archive
All messages to the Tweeters listserv during 2020 have been added to WOS’s Tweeters Archive. The archive now contains all messages from 1994 through 2020. The birding listserv is hosted at the University of Washington, which currently keeps only two years worth of messages. WOS agreed several years ago to create and host an archive with all older Tweeters messages. You can search or browse for messages at WOS’s Tweeters Archive.
All 13 Washington Birds Journals are now online
All 13 of WOS’s Washington Birds journals published between 1989 and 2021 can now be read on this website or downloaded. Volume 13 was published in April 2021. WOS had already placed the four most recent journals before that online. And WOS President Jennifer Kauffman recently had the eight earlier journals scanned to .pdfs so the complete set of journals could be made available here.  Find them at the bottom of the Washington Birds page.

Go to WOS’s Monthly Meetings page for information on our fabulous monthly meeting programs. WOS members who live outside the Seattle area (or are on the road) can still attend using a computer, tablet or phone. It’s easy!