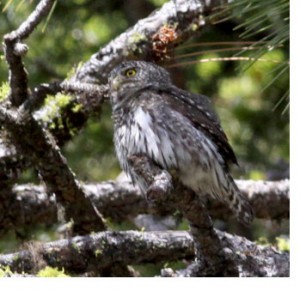 A dozen enthusiastic birders headed for Table Mountain, north of Ellensburg, on Saturday, June 14. In September 2012, a fair chunk of the upper elevation habitat of the Table Mountain area was burned from multiple fires set by lightning. Of course, with the burned habitat, woodpeckers, especially Black-backed and American Three-toed were high on the list of target birds for this trip. As often the case with well-planned WOS conference field trips, the targets do not always fall into place, but other observations – sought-out birds, surprise birds, or interesting bird behaviors – more than made up for target misses. Woodpeckers eluded us: our final two eBird lists for the day only contained three woodpecker species (Williamson’s Sapsucker, Downy Woodpecker, and Northern Flicker). But a fair amount of sunshine along with a handful of other interesting sightings made for a special day in northern Kittitas County.

As we caravanned through Ellensburg in the early morning, the swaying foliage along the roadsides indicated that the notorious brisk winds in this area would make things tough. After a few quick stops along the Reecer Creek drainage at the southern base of Table Mountain, we finally reached a spot in the upper section of riparian area of the creek (where it meets with a coniferous hillside) that was mostly out of the wind and provided us with a few hours of very nice birding. Though a bit cool to start, walking up and down a short section of road, and netting nearly 50 species of birds with great looks at many, warmed us up. During the late morning and mid-day we birded the burned areas and meadows of the upper elevations and the coniferous areas below it. Wind was no longer much of a problem, though a general lack of birds pushed us to move to finish the afternoon on a spur road at lower elevations. The road provided a few hours of afternoon birding and a wonderful walk to a view of the rugged mountains west of Blewett Pass.

Amongst the 70+ species for the day, a few observations made the highlight list. A Blue Grouse frozen along the side of the road, though only observed for a brief while before being spooked off by a passing car provided for interesting discussion. Given the possibility of either Sooty or Dusky Grouse, or perhaps a hybrid combination of the two in this location in Kittitas County, we had to settle for a Sooty Grouse/Dusky Grouse entry on our day list. An adult Northern Goshawk cruising above us along a ridge in mid-afternoon was quite satisfying even if only for that brief minute. A Northern Pygmy-Owl dazzled the group with point blank and prolonged views in the late morning. Certainly this fella was not all that delighted with my imitation hoots. Though we didn’t see some of the target woodpeckers, no participant complained about watching a pair of Williamson’s Sapsuckers attend to some nestlings in a snag along the road in the early afternoon. After the very satisfying mountain views, our day finished with a seemingly out-of-place Peregrine Falcon cruising above us as we worked our way back to the vehicles for a return to conference headquarters in Yakima. 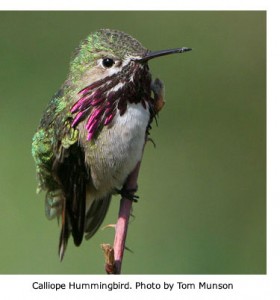 Three vehicles filled with 12 intrepid participants headed off from Yakima for the renowned Wenas Creek Valley at 05:30AM. The plan was to bird our way to the Wenas Campground, with a return on Umtanum Road back to Ellensburg and then through the Yakima Canyon on the Canyon Road back to the conference headquarters. It was a bright, sunny day, but the wind was an issue.

Our first stop at Wenas Lake produced a cooperative pair of Bullock’s Orioles, a singing Warbling Vireo, several Cedar Waxwings, and lots of wind. We retreated to Hardy Canyon, where a Yellow-breasted Chat gave a steady rendition of its storied repertoire, but only fleeting glimpses to our assembled group of binocular-clad observers. A short hike up the canyon yielded a Lazuli Bunting and a grand view of the green canyons in the Oak Creek Wildlife Area, but the 20+mph wind made us cut our time short and head north up Hardy Canyon. It is a short drive to the Wenas Campground from there, the last three miles on a third-world class dirt-road.

We drove our rental vehicle up Hog Ranch Road to the level area above the main campground. Gray Flycatchers, Cassin’s Finches, Mountain Chickadees, Yellow-rumped Warblers and others, all responded to my whistled Northern Pygmy-Owl imitation. At one point, we had all three species of Washington nuthatches (Red-breasted, White-breasted, and Pygmy) in the same tree at the same time!

Of course, the primary focus was on seeing a White-headed Woodpecker. Extensive searching north of Hog Ranch Road was futile. We finally got good, but distant scope views of a drumming male when we returned to the area where we had parked our vehicles.

A walk along the east-facing slope earned us fine views of a male Calliope Hummingbird and several “singing” Dusky Flycatchers. Lunch along the stream east of the entrance to the campground gave us close studies of Cassin’s Vireo, Nashville and MacGillivray’s Warblers, House Wren, and several species of swallows. 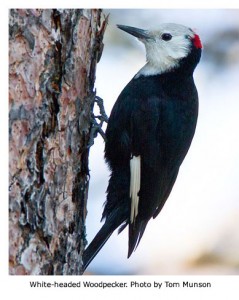 After lunch we started our return to Yakima, stopping at various locations along the Umtanum Road. A stop near Bluebird Box # 45 gave us excellent views of another White-headed Woodpecker and some Red Crossbills as well. The wildflowers in mid-June are spectacular. When the birding slows down a bit, there is a wealth of botanizing to fill the vacuum.

One could spend an entire day birding the 18 or so miles from Wenas back to Ellensburg, but time constraints allowed for just a few stops at areas that I had scouted the day before. Vesper Sparrow, Sage Thrasher, Brewer’s Sparrow, both Bluebird species, and a Townsend’s Solitaire were all cooperative. After emerging from the “wilderness”, the group thought a stop at the ice cream shop in Ellensburg was deserving of our time, and most indulged in a refreshing, cool treat.

The Yakima Canyon was another destination that deserved more time than we were able to allot, but stops along the way did give us nice looks at White-throated Swifts, Prairie Falcons, and a Golden Eagle perched on the cliff face. Fortunately we had watched the eagle coursing across the cliff face and land. It was just barely visible through the scope, a mere speck, more than a half a mile away!

We managed to record 85 species for the day, the wind notwithstanding. The avian possibilities on that route are many. Spending a day exploring the Wenas Valley and environs in mid-June is a birder’s dream come true.