Over 170 birders converged on Spokane from June 8 to June 11 for the 24th Annual WOS Conference.

When those of us on the Conference Committee selected the date for the conference more than a year in advance, we tried to choose one that would be late enough in the season to avoid snow on high spots such as Mt. Spokane, but not so late that we would be dealing with too much heat on trips to locations such as Swanson Lakes and northwest Whitman County. Despite our careful planning, during the week of the conference, late-season snows covered high mountains in the area, including more than six inches reported on Mt. Spokane at the parking lot. Many field trips on Saturday — the busiest day of the conference — had weather that failed to break 60 degrees and was coupled with rain showers and wind.

Despite the bad weather, birders did what good birders do — they battled the weather and used their eyes and ears to pick out every possible species. Few trips returned early, even on Saturday, and several trips on Saturday even beat their Friday equivalent trips in number of species seen, even though Friday had warmer temps and birders didn’t have to battle the hard rains and wind! Multiple trips on Saturday broke the century mark for species and several trips broke 110! This can be attributed to three things:

2. The amazing field trip leaders who battled unfavorable weather conditions and still pulled out memorable days for participants; and finally

3. The astounding caliber of participants on WOS conference field trips. Many are field trip leaders themselves for Audubon societies or for WOS. There was one more factor that helped to make many of these field trips for Spokane highly successful. Spokane is blessed with an incredible resource of local birders who not only are highly skilled, but also know their areas and have the rare ability to put together a high quality experience for their participants. 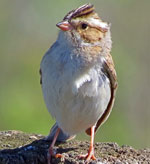 When the dust (and the wind, rain, and snow) settled, the four-day conference had tallied an impressive 201 species of birds seen on field trips. Most people would agree that the most notable bird was found early Saturday morning at the Rosalia Sewage Ponds; Mike and MerryLynn Denny found an Eastern Phoebe. Thanks to modern technology, the bird was photographed, recordings were made, and calls went out to surrounding areas, all within minutes of finding the bird. I was leading a trip in Lincoln County at the time, perhaps 100 miles away from Rosalia, when two of my participants received these calls notifying them of the sighting. Though I gave my participants the option, none of them “bailed” for Rosalia. These dedicated efforts were eventually rewarded, as the Eastern Phoebe still remains as of this writing — nine days after the end of the conference.

Here are some of the great birds seen by participants on conference field trips.

Twenty-three species of ducks, geese, and swans, including a Tundra Swan at Sprague on June 8 and a male Eurasian Wigeon on West Medical Lake on June 9 and 11.

A Herring Gull was seen on June 11 on the Pend Oreille River. Back Swifts were seen on several trips in southern Stevens and Pend Oreille counties. A Purple Martin was found at Sullivan Lake in Pend Oreille County on June 9 and finally, Black-throated Sparrows were noted in multiple locations on Steptoe Butte in Whitman County, for the first time in a couple of years, according to local birders.

Once the daily field activities were over, participants settled in for the evening entertainment and enjoyment of the company of their birding friends. Let’s be honest — most of us would consider birding a social activity, especially those who choose to participate in the annual conference.

Friday night, we were brought into the world of White-headed Woodpecker reproductive ecology by Jeff Kozma, and by the discussion and number of questions following the talk, it was clear the group thoroughly enjoyed the glimpse into this species’ ecology.

Saturday night after our appetites were satisfied by drink and food, we were treated to two special occurrences. The first was meeting two of Washington’s upcoming birders, Fanter Lane and Kyle Leader, both recipients of the 2012 Patrick Sullivan Young Birders Fund award to attend Camp Colorado this summer. Judging by the enthusiasm of both young birders on field trips at the conference, I have little doubt that they soon will be leading WOS trips themselves.

The evening was capped by Mike Schroeder, renowned grouse expert, helping us to understand the complex world of Dusky and Sooty grouse as well as the upcoming split of Franklin’s and Spruce grouse.

Did I say that participants were finished with field activities? Well, most were and returned to get brief sleep before awakening around 4:00 AM for field trips. But an adventurous few went out on owling trips until around midnight.

Thanks to all the people who helped to make Spokane a success and extra thanks to Cindy McCormack who once again took on the tiring job of registrar.