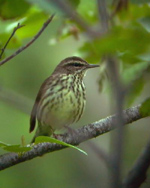 This year’s conference was centered in Republic, Washington. 131 individuals attended the four-day affair and for the most part enjoyed pleasant, late-spring weather amidst the superb scenery of the Okanogan Highlands, Kettle Range and River valley, and Little Pend Oreille country. A total of 34 day-trips and six owling trips were conducted and included a total of 389 participants. The majority of day-trips included 11 participants and one leader, while those in search of owls or hiking private property were capped at six participants and one or two leaders respectively. In particular, hiking in small groups proved to be a “group-pleasing,” informative, “slow-motion” experience with the habitat as well as a relaxed break from cramped auto travel and noise.

Although approximately 175 avian species were tallied for the Conference, an amazing 140 were “ticked-off” on the first day (great cheers and sighs of relief were easily heard from all WOS officialdom and trip-leaders as birds of all sorts had been difficult to find during the torrential downpours afflicting the area during the ten previous days). Weather-wise, how serendipitous it was that we had listened to business folks in Republic in 2005 and did not schedule the Conference for the preceding “Prospector Days” weekend.

Birdwise, scouting routes the week before was not nearly as productive as during our Conference—in fact, species like common nighthawk, black tern, and others had apparently not yet arrived. We just got lucky!! The singular expected species that “escaped” detection was spruce grouse; prime areas on Togo Mountain and especially along the neighboring Independent Creek drainage had been recently devastated by fire. Similarly, other “prayer and candle,” want-list species such as blue-headed and Philadelphia vireos, Tennessee warbler, and Le Conte’s sparrow went undetected in the Northport area.

But, “Oh Well,” many groups otherwise got to enjoy boreal inhabitants such as black-backed and American three-toed woodpeckers, Williamson’s sapsucker, and the fabulous great gray owl—truly the “ghost of the forest.” Some groups encountered black bear or moose. Both species have experienced population increases in eastern Washington, so don’t be surprised on your next visit to Spokane when you find the latter in wheat fields or sage west of town—for at least a decade, they are no longer a surprise out there!!

Other nonwinged, special critters included badger, beaver and snowshoe hare, the latter in brown, summer “plumage.” However, for those in agony because they missed great gray owl during the Conference, do not despair. Between scouting and trip-leading time in the Okanogan Highlands (eight days in all), I was fortunate to see, and in six instances also hear, nine of those ghosts. While I’m sure you’re thinking they were surely all repeaters in one (notable) spot, they absolutely were not on either count. Rather, they were spread out in at least five different, widely separated locations—surprisingly, four were found hunting from phone poles or fence posts fronted or surrounded by wheat fields!!

In the same vein, if flammulated owls have been your nemesis, maybe it’s because you’re expecting them to be in mixed yellow pine/Douglas-fir on south-facing slopes. Take heart, but by golly, turn 180o degrees around—nine of eleven I heard during the same period were on cold, non-moon-lit, north-facing slopes in mixed Engelmann spruce/western larch/Douglas-fir above wet meadows or lakes. I hope you get the message in here somewhere: expect the unexpected, and by all means get out there and discover.

Our guest speaker at the banquet was Chris Loggers, Wildlife Biologist with the Colville National Forest. A few days before he spoke, Chris asked for some guidance on time allowed for his talk; Brian told him 30 minutes–I told him 45 minutes to an hour. Fortunately, Chris paid NO ATTENTION to either of us, or otherwise took our advice in sum total because he held the crowd in the palm of his hand for oneand- a-half hours.

Thus an after-dinner crowd of more than 100 in the Ferry County Fairgrounds Pavilion got to listen to a fabulous presentation that began with the geological evolution of the area from Okanogan to Pend Oreille Counties. Following, in order, were the development of soil and vegetation, and ultimately, habitat for the mammals, birds, amphibians, fish, and insects that we might encounter on our field trips. The effects of fire, erosion, and human use were woven into and compared with a tapestry of area natural events and changes over time.

Chris’ talk was liberally embellished with digitized area maps, gorgeous wildlife and scenic photos by Tom Munson and Scott Price, and video clips of mating grizzlies as well as a lynx strolling along a gravel bar in the Little Pend Oreille NWR. In summary, I really want to thank each of you for attending the 2006 WOS Conference, and I hope you enjoyed a gorgeous and delightful area of our state that is almost as far (in terms of driving time) from Spokane as it is from Seattle.

Because access is not easy, the area from the eastern Okanogan to the Selkirks of Pend Oreille County remains one of the most poorly birded in Washington. particularly indebted to 22 brave individuals who volunteered to lead 40 field trips in spite of the fact that most had either never been to or had minimal experience in their assigned areas.

With most day trips averaging in excess of 100 species, these men and women simply went out and got the birds—what a tribute to their terrific field skills!! And in the last few days before commencing the Conference, when serious circumstances forced a few leaders to cancel at literally the last hour, there were a couple of notable characters in the rogues’ gallery of Washington birders (pictures likely PROMINENTLY displayed in a post office near you) that when asked to lead a fourth trip (that’s fourth, folks) did so without a whimper or a gee-whiz or a “but I’m already……….”

To those binocular-packin’, joke-laden characters (and I think you can figure out who they are without me “blowing their cover”), I truly appreciate your friendship and pure, no-questions-asked GUTS. And, last but not least, a huge THANKS to the professional, courteous, and enthusiastic owners/managers of the three Republic motels (Valerie Hester, Kathy Ciais, and Rock & Darlene Gliddon), the Fairgrounds director (Katherine Meade, who invited me to address the Chamber of Commerce back in July, 2005), and local residents (Don & Ione McKnight and Lee Johnson), all of whom when I showed up in February, 2005 asking if we could manage a WOS Conference in Republic, gave me great advice and made developing arrangements and meeting the “right” people in a beautiful mountain town a breeze.

I hope you in Republic know that whether singularly or en masse, we want to come back and say HELLO many times more!!! Thanks again to all.